Google is a search engine that never stops innovating. All around me I hear people saying that its monopoly in the West may be a curb on innovation by looking coolly at where we were ten years ago and where we are today in terms of information search, but you don’t need a photo to tell the difference.

This takes me straight – subtle change here – to a brief look at image search.

I’m assuming you’ve heard about the fuss about the man without swimming trunks on running into the water that an absent-minded photographer forgot to crop out when editing. There’s a fuss, more fuss and yet more fuss… and incidentally the journalist involved has probably caused the biggest peak in traffic experienced by La Redoute’s site in the last decade.

So, we can measure the fuss with appropriate monitoring / online reputation / social media monitoring tools. And that works well with fusses that are text-based. But in this instance here the very core of the fuss is based around an image.
So, how can this image and its misappropriations be tracked then?

Before we would have typed “La redoute” into Google images, perhaps adding filtering by date…But that wouldn’t have worked well.

A search for one week of the type: fuss AND “la redoute” provides more appropriate results, but these still have a large element of noise.

Fortunately, from now on Google offers the possibility of uploading an image or even entering its address and then seeing if there are images based on it that have been created, subverted or redistributed. This can be done right next to the button on Google Images for inputting keywords:

All we have to do now is give Google with a suitable image (the original one or even one that’s already been subverted); this one for example: 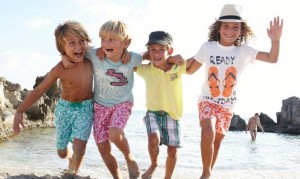 And then by a miracle of technology, you’ll find the images that Google has in its database that are based on this initial image. 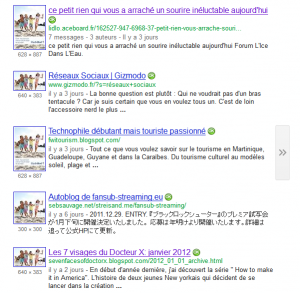 A miracle of technology indeed.

Google sceptics will tell me that it’s not the first to do that, to which I will retort far from it and also say that I had dealt with the case of the www.tineye.com search engine or even Retrievr, amongst others in this old article, “Image search by similarity [FR]”.

However, it is clear:

Here it is, a simple and effective tool working for community managers who want to be able to search for an image by using an image. I won’t say anything more, but there’s a pseudo-European French-speaking/French multimedia search technologies pseudo-project that would do well to wake up a little.

Other possible uses for this search engine :