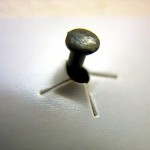 Influence is a word that keeps cropping up when online reputation and its implementation are addressed.

Influence is considered first and foremost as one of the analytical keys for  its community ecosystem, clients or even detractors, but also as one of the weighting keys for its opinion leaders whether they’re pro or anti.

I will not return to the notion of influence. It has been defined, redefined and contra-defined whether that involves the academic definition or the online reputation point of view.

For my part, I like defining the influence of an individual or medium as its ability to influence the behaviour of those with whom he or it interacts (reading, conversations, promotion, activism, etc.) What’s more, I don’t think I’m the first to uphold this definition and even less the person who first mentioned it.  Many psychologists or sociologists have drawn up and enhanced this definition by also attempting to determine the levers for exerting influence.

But here’s the problem. If this influence could be easily measured in a vacuum, if it’s conceivable to determine it for a signal that is broadcast and can be accurately and clearly isolated by the person receiving the influence message (typically an advertising campaign specific to a time t), it’s far more difficult at the level of the Web, especially if there may be multiple and varied influence messages.

This then raises the question of the influence measurement for a website, a blog, a tweet or an anonymous person on its or his community of friends.

And although I despise the notion of influence reduced to its pure quantitative analysis, i.e. an artificial figure which is derived from the crude compilation of several observable metrics (number of followers, number of videos posted, number of likes, etc.), I’m forced to admit that Klout is an operational tool that’s far from perfect, but one which  has several advantages for those who wish to have a useful indicator at their disposal.

Let’s remembers first and foremost that Klout is a general indicator which ranges from 1 to 100. At 0, it’s no good dreaming. No buzz marketing, communications or sponsored feature agency will be contacting you. At 100, you’ll have weekends in palaces, champagne and various benefits in kind and of all types.

There are two possibilities so that Klout can calculate this indicator:

Consequently, the score is calculated according to the metrics that can be observed on each of these networks, which are measured, combined and regurgitated.

The operational benefits that can be gained from using Klout can be easily realised:

As with all so-called Web 2 solutions which are riding high, Klout has developed its own APIs (Application Programming Interfaces).

It is undeniably one of the points which makes Klout a solution that enables a large-scale roll-out of measuring the influence of content producing internet users to be envisaged.

And, of course, the point of this post was to show you what it is possible to do with Klout’s APIs.

An API enables data to be sent to a third party solution and for it to be asked to process this data within its system and to send the completed results of the processing to be sent back to you.

Without going into details, an API enables a vendor such as Klout to:

Consequently, before working with Klout’s APIs, you’ll need to apply for an identifying API key that you’ll need for all interactions with Klout’s infrastructure and, if you’re brave enough, you’ll have to study the documentation (V1 of the Klout API should be done away with in the near future, but V2 is still only in beta).

What do Klout’s APIs enable?

Klout’s APIs enable different items of information to be obtained, such as:

Klout’s APIs have some more not insignificant advantages which are using GET and providing the output data in XML format or JSON format. (For novices, XML has the advantage that it can be opened with most of the latest versions of Excel type spreadsheet programs.)

Basically, this is how we could set about getting a nice Excel score file for the accounts held by Bouygues Télécom.

which you will then be able to import very simply by saving it in Notepad with an XML extension and opening it in Excel for example. For those who are more geeky, a direct import into a MySQL or other database is also relatively straightforward via libraries such as, for example, PHP XML Library, Magic Parser in PHP and similar libraries available in the most common programming languages or provided directly by these same languages.

As the number of “scorable” accounts in a single call is relatively high (limited by the length of the GET URL), you can easily implement a simple, low-cost solution developed in-house to enhance the content collected by an online reputation system.

To do even more, it’s also possible for you to go down the networks modeling and mapping route by relying on two methods which enable you to find out the influencers and those who are influenced from a list of Twitter accounts sent to the API. A little processing loop and there you are, busy building up a structured and scored database of Twitter accounts. For producing a map of its ecosystem, for example?

Below is an example for Bouygues Télécom’s accounts using the command “influencer of”: 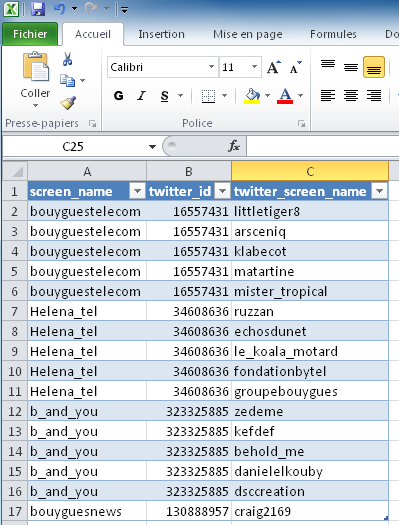 which shows us for example from a quick glance that the BouyguesTelecom account reaches the general public, whereas the Helena_Tel account is mainly picked up by incestuous, made in Bouygues accounts and Echos du Net (and by two other accounts).

Conclusion
Klout is not a panacea for measuring influence in the smallest socio-psycho-societal and website nook and cranny, BUT Klout, and its APIs in particular, have their place in online reputation strategies and particularly in those that have to process a large number of  contacts and amounts of content.

Klout is imprecise, Klout gives a general picture, Klout is simplistic, but Klout provides some answers, however imperfect they may be, whereas others only provide questions.

Moreover, as they are built – very simply – around a GET call, Klout’s APIs are easy to implement and integrate, with the results being based on two of major data exchange standards, JSON and GET.

In addition, a small detail that will interest lovers of Social Media Monitoring solutions, Radian6 has accepted Klout as its influence scoring solution and has integrated it into its Desktop interface (Radian 6 Engagement Console) and online.

Furthermore, let’s not forget that the best way of knowing your influencers is to have human knowledge, with tools such as Klout then enabling checks to be carried out beyond the bounds of its knowledge, the carrying out of consistency checks or random checks, or even discovering new potential influencers.

Going further
There are other influence indices such as:

Nevertheless, as far as I’m concerned, I find that the Klout APIs offer more possibilities.