It’s a mapping survey carried out on World Diabetes Day which was held on 14 November.

It aims to show how mapping tools can easily enable an overview of stakeholders to be drawn up for a short event, as well as the keywords used to mention an event.

The items mentioned in the maps below are tweets. Collected through several linking statements, all the tweets (well, a maximum number of tweets) were mined since they comprise one of the following keywords:

Thus we collected 36,500 tweets over 3 days (13, 14 and 15 November), of which more than 20,000 were posted on World Diabetes Day, demonstrating the high level of activity linked very closely to the event.

In addition, the act of extending the collection to words other than the single word WDD enables us to reconstruct the event in its Twitter ecosystem, bearing in mind that the majority of average Twitter users are not particularly familiar with hashtags and are probably even less aware of the official WDD hashtag. As diabetes is a matter of concern to the general public, it is  vital to be open about the query so as to reproduce the most faithful image of posts about WDD, even if the latter comprise neither the hashtag nor the word WDD.

2) The most active accounts

The very simple graph below enables us to spot the 30 main Twitter accounts that posted on this subject. 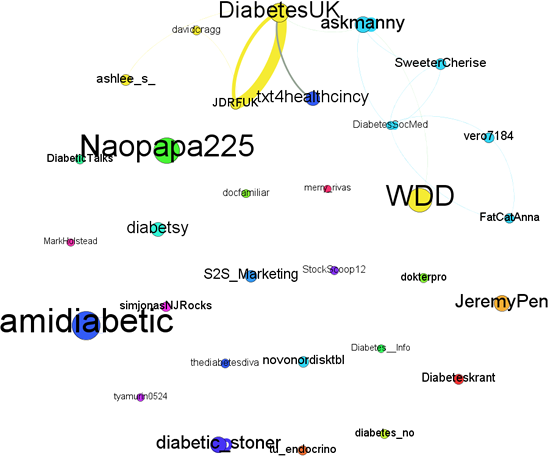 Reading the graph lets us make out the existence of two fairly large and fairly close clusters in light blue and yellow. The yellow cluster is the one which is formed around the official WDD account with the DiabetesUK account and JDRFUK nearby.

Reading each of these accounts enables easy identification of the topic’s key players and recognition that even quite obscure accounts have an interest in and are active on the topic.

In short, there are many spokespersons for diabetes and World Diabetes Day: manufacturers, associations, organisations, private people / persons, with the latter comprising some people who are particularly active on social media, etc.

Lists of accounts in a clickable Excel format can thus be easily built up.

Here are the top 100 accounts dealing with this topic in terms of number of tweets.

3) Analysis of the accounts and their relationships

It is nevertheless of interest to note that a large number of clusters is shown on this map even though the most active people on the same topic generally account for a limited number of clusters. This is due to the very international generic term diabetes (and thus for the leaders in each country being kept relatively far apart due to the constraint of language) and also by the wide variety of people concerned that changes within the various circles.

The above map gives a good overall view of the topics of WDD and diabetes over the 3 days of collection. To begin with, it is undeniably a topic for the general public involving a large number of people who feel concerned, but who don’t necessarily exchange views using obvious accounts on the topic or ones that are identified with it. This is shown well by the size of the central bubble that comprises the less active accounts.

Then we notice a very compact community on the topic with a high level of interactions and very dense criss-crossed links. These active and similar accounts reach several layers of people and their messages thus manage to spread and produce interactions between the various layers of groups of people or micro-communities.

It must be noted that the the community is not normally so densely linked. Here a clustering of accounts is observed around the WDD account, including those in various languages. The change observed in a mapping analysis before WDD and during WDD clearly shows that the WDD account and the event in general is therefore deeply unifying and moreover that it contributes considerably to increasing the volume about the theme of diabetes.

The map above shows accounts that posted at least 5 times on the theme during the period, as well as the network they produced (existing interactions).

This very interesting view enables recognition of the fact that the most active accounts manage to reach out and give rise interaction and not that they form a closed community. It is obvious here that they managed to produce interactions since, with 605 accounts having tweeted more than 4 times, this is 2,840 accounts forming a continuous network of interactions shown on our topic.

Several things can be observed on this map: 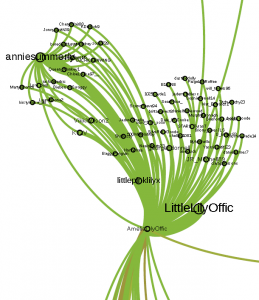 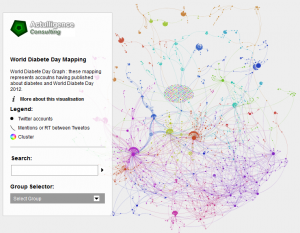 4) Analysis of hashtags and the relationships between them

The hashtag map enables the hashtags most mentioned together in the same tweet to be spotted.

The map below shows the hashtags which were mentioned more than once in the body of the collected tweets. This very simple filter criterion enables us to eliminate the hashtags which are too marginal and are generally the action of a single person which did not give rise to any mention or RT.

It comprises 1,329 hashtags which is a large number if it is borne in mind that the collection request only contained a fairly small number of keywords.

Hashtag maps are more tricky to read since they generally comprise a greater proportion between the nodes (hashtags in this case) and larger edges (joint mentions between hashtags within one and the same tweet here) than other types of map.

However, the map clearly shows a cluster (violet) related to the hashtags for World Diabetes Day in which we can detect amongst others:

Therefore a relatively large number of hashtags can be seen that were rated as being directly linked to the event.

To begin with, there are the various declensions of WWDD, WDD12, WDD2012, etc., which also shows the difficulty of “imposing” an official hashtag and the need to keep an eye on the environment for different names even if a watchword is given.

We can also clearly see the event’s linguistic declensions and that the latter do not produce a linguistic sub-cluster. This is explained by the fact that the noun diabetes is the same in Spanish and German amongst others, and by an overexposure of the English language in this event and probably also by a smaller sub-community of German and Spanish tweeps affected by the topic (in the language in which they were postedin any event!)

In terms of public relations and consequences, the map also enables key events or the associated bodies to be spotted:

Of course, other clusters than that for WDD are apparent and we can indeed notice the existence of:

For the more inquiring and health or diabetes professionals, you’ll find below the full map of the hashtags collected comprising more than 4,200 terms.

5) Analysis of the relationships between hashtags and accounts

The map below, which is based on the same body of collected tweets, is a map which highlights the relationships between Twitter accounts and hashtags.

The enables identification of the most vigorous promoters of such and such hashtags.

The orange links show the connections between an account and a hashtag. The hashtags are in yellow and the accounts in red. This map comprises  2,287 points, but we concentrated solely on the WDD cluster WDD and eliminated the residual clusters (such as that for diabetes, for example). Note therefore that this means the hashtags related to WDD but not rated as central within the WDD cluster could be eliminated; and this is the case anyway.

For the more inquiring only, once again here’s the complete map below of the accounts and hashtags for the WDD cluster:

First of all, the above analysis is a partial analysis carried out on a large number of tweets. It is vital to understand that the mapping analysis derives all of its interest from answering certain questions and is even more in-depth if you have very specific accounts or hashtags that you wish to study.

What we can observe is that:

7) Other sound and instructive reading about data mapping

– Mapping : don’t turn your brain off by relying on the tools [French]